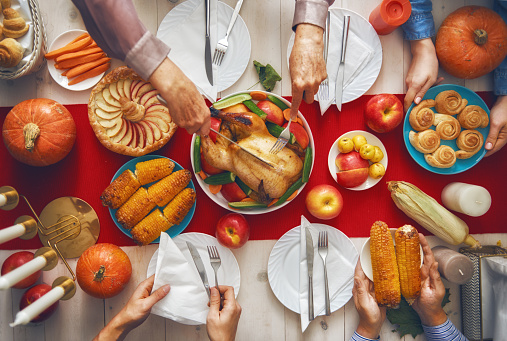 The day after Thanksgiving is the busiest day for plumbers, according to Roto-Rooter. Meal prep and cleanup can clog drains and garbage disposals, and guests requiring “additional clothes washing, showers, and toilet flushes put a strain on household plumbing,” the company says. It experiences a 21 percent increase in calls over the four-day weekend than any other Thursday to Sunday period in the year.

Big Bird’s suit on Sesame Street consists of turkey feathers that have been dyed yellow. The American Plume & Fancy Feather company is responsible for making the suit, and Big Bird is its toughest customer, owner Anthony Trento told CNN in 2008. “His tremendous costume uses feathers from the rear end of a turkey, which are rarely clean. Sesame Street rejects nine out of ten feathers,” said Trento.

Every year, millions watch the Macy’s Thanksgiving Day Parade in person and on TV. Macy’s began the parade, then known as the Macy’s Christmas Parade, in 1924 to celebrate their expansion and new status as “world’s largest store.” People today would be familiar with most of the first parade’s contents; there were floats featuring nursery rhyme characters and Santa Claus in his sleigh. What might be out of place today were the animals—bears, elephants, camels, and monkeys loaned from the Central Park Zoo. Giant balloons debuted a few years later, in 1927, with Felix the Cat among the very first.